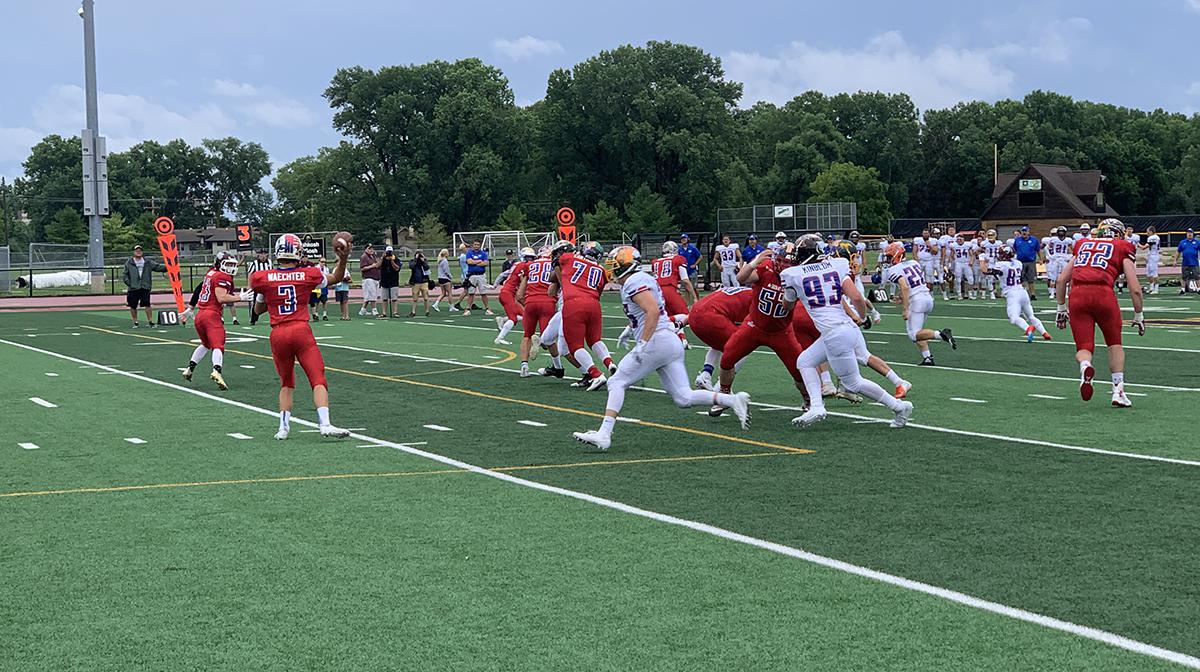 The 2019 WFCA All-Star Games were held Saturday at Titan Stadium in Oshkosh. The North squads took the final two games of the afternoon after the South 8-Player team posted victory in the morning. Full stats and recaps below.

The WFCA All-Star Games serve as a fundraiser for the Children's Hospital of Wisconsin. This year's coaches and players raised more than $370,000.

After seeing the North team claim four consecutive victories in the WFCA 8-Player All-Star Games, the South squad ended the run with a weather-shortened 21-6 victory on Saturday at Titan Stadium in Oshkosh.

Gibraltar's Trevor Reinhardt had a hand in all three touchdowns, running for two short scores while adding a long pass, all in the first quarter. Reinhardt completed 12-of-19 passes for 205 yards in the game.

Reinhardt opened the scoring with a one-yard plunge on the opening drive after hitting Kasey Kalafice for a 58-yard completion on the first play from scrimmage. On the very next South drive, Reinhardt found Port Edwards' Addison Gibbs for a 48-yard touchdown.

Another Reinhardt touchdown run would put the South up 21-0 with 3:52 left in the first quarter, but the North answered quickly when Luck's Dennis Brule scampered 38 yards for a score.

As the teams warmed up after halftime, severe weather moved into the area and the stadium was evacuated. A short time later with strong storms on the radar for much of the day, the decision was made to cancel the game.

Despite not completing a pass, the North Small School team rode a strong rushing attack to a 21-14 win over the South team. The game was delayed to severe weather, and the team's played shortened 10-minute quarters.

It was a South running back who opened the scoring however, as Martin Luther's Darios Crawley-Reid went in from 19 yards out with 5:34 left in the first quarter.

The South team wouldn't go away, with Caleb Raymond recovering a fumble in the end zone in the third quarter to tie things up once again.

Ehrike scored another touchdown early in the fourth to put the North ahead 21-14, and the northerners forced a punt on the next South drive. Taking over with 5:45 remaining in the game, the North racked up 75 yards on 12 plays to run out the clock and secure the victory.

Huettner rushed for a game-high 70 yards on 12 carries, while Ehrike added 58 yards and a pair of scores on 15 attempts. South quarterback Mitchell Waechter from Saint Mary's Springs completed 11-of-23 passes for 118 yards in the defeat.

An eight-year run came to an end, as the North team took advantage of six interceptions to come back to top the South team 19-11 in the Large School All-Star Game.

The South team went up early, as it appeared to perhaps be more of the same as recent seasons. Cooper Nelson (Sun Prairie) hauled in a 31-yard pass from McFarland's Derek Schwarting to open the scoring with 2:04 left in the second quarter. The South would get a safety less than a minute later, but the North put together a quick scoring drive, capped by a touchdown from River Falls' Logan Graetz to Howie Newbauer IV of Homestead from 16 yards out as time expired in the first half.

A pair of second half touchdowns by the North team were sandwiched around another South safety, as North secured the win with defense, intercepting six passes in the game, including picks to end the last three South drives.

Four of the six interceptions came from La Crosse Central's David Hayden, as the North team got the edge in quarterback play. The trio of Logan Graetz, Cody Staerkel, and Keyser Helterbrand completed 15-of-23 passes for 223 yards with three touchdowns and no interceptions.

Kaukauna's Mason Van Zeeland caught four of those passes for 110 yards and a score.

For the latest and most up to date football news and recruiting information, follow Travis on Twitter @travisWSN. Email story ideas, recruiting info, etc. to Travis at travis(at)wissports.net.