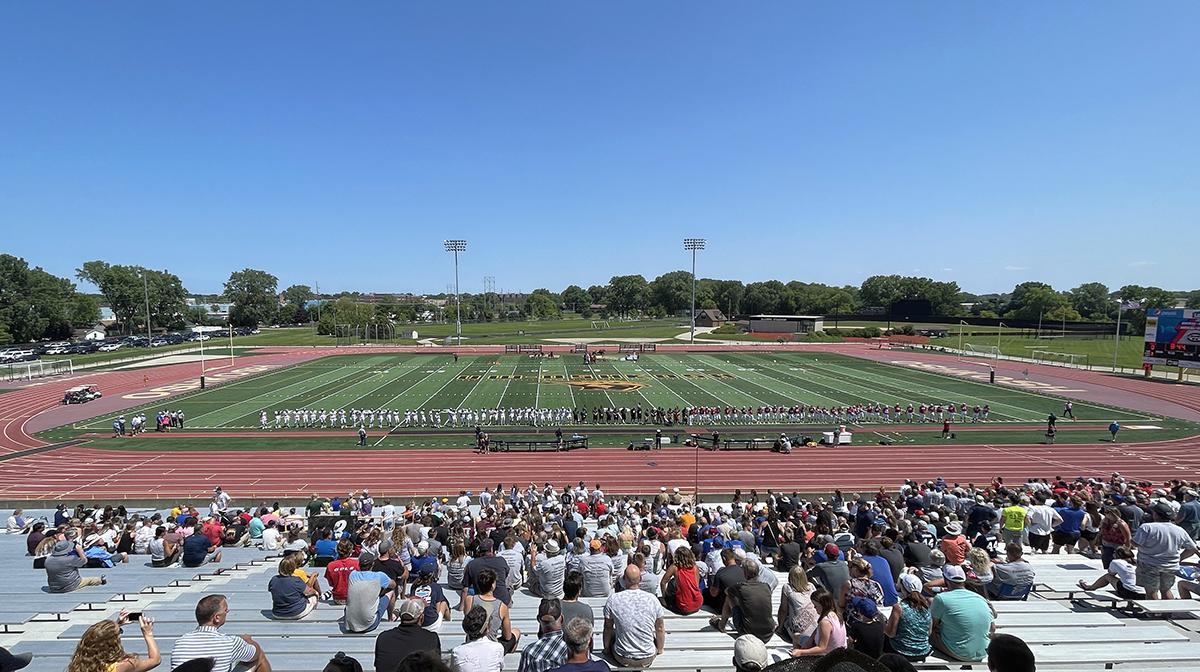 After a year off due to the pandemic, the 2021 WFCA All-Star Games were held Saturday at Titan Stadium in Oshkosh. The North squads took the final two games of the afternoon after the South 8-Player team posted victory on Friday night. Full stats and recaps below.

The WFCA All-Star Games serve as a fundraiser for the Children's Hospital of Wisconsin. This year's coaches and players raised more than $300,000.

After trailing the North 8-Player team 8-7 at halftime, the South 8-Player team erupted for 21 third-quarter points to pull away for a 35-16 victory in the WFCA 8-Player All-Star Game on Friday, July 16th at Titan Stadium in Oshkosh.

The South team got on the board first when quarterback Riley Christensen (Belmont) went in from 11 yards out late in the first quarter to put the team up 7-0.

The North would answer early in the second quarter as Gunnar Lewis (Clayton) scored from a yard out and tossed a two-point conversion for an 8-7 halftime advantage.

The South team would still trail midway through the third quarter before Dylan Ackermann (Newman Catholic) scored on a two-yard touchdown run. It was the first of three touchdowns in less than five minutes for the South, who took advantage of a North team fumble for their next score before forcing a three-and-out and getting in again a short time later.

While the North would pull within 28-16 early in the fourth quarter on another short Lewis touchdown run, Ackermann found Jake Oertl (Williams Bay) for a 10-yard score a few minutes later to provide the winning margin.

The South team ran for 197 yards, with Christensen, Ackermann, and Sullivan Whitford (Greenwood) all going for at least 60 yards. Ackerman added 98 yards and a score through the air as well.

The South team forced five turnovers by the North squad, recovering four fumbles and intercepting the North as well.

The North team won a defensive struggle 17-14 over the South in the 2021 WFCA Small School All-Star Game on Saturday, July 17 at Titan Stadium in Oshkosh.

The game turned in a 62-second stretch in the third quarter, when Aaron Haselwander (Regis) kicked a 26-yard field goal to break a 7-7 tie, before William Pollack (Lourdes Academy) picked off a tipped pass and returned it 51 yards for a touchdown to give the North a 17-7 lead.

The South would try to make a game of it, with Konner Knauf (Edgerton) hauling in his second touchdown of the game, this time from Darris Schuett (New Glarus/Monticello) to pull within 17-14. They'd get one more chance, but turned the ball over on down at the North 29-yard line with 1:54 left in the contest.

North quarterback Tristan Schelvan (Amherst) opened the scoring late in the first quarter when he found the end zone from 26 yards out on a keeper, before Knauf hauled in a pass from Adam Moen (Lake Mills) to tie things up just before halftime.

Schelvan had a big game with 114 rushing yards and a score, adding 50 passing yards as well. Mac Strand (Xavier) had a game-high 12 tackles on defense, including the key fourth down stop in the closing minutes as the South was trying to come back.

Moen and Schuett combined to complete 15-of-28 passes for 137 yards and two scores. Knauf caught five passes for 58 yards as part of his two-touchdown day.

It was a slugfest throughout, with just 212 yards of combined offense in the game, but the North team's defense was too good in a 7-0 victory over the South in the 2021 WFCA Large Schools All-Star Game on Saturday, July 17th at Titan Stadium in Oshkosh.

Appropriately, the game's only score came on defense, as North linebacker Damon Loker (Kimberly) intercepted a pass from South quarterback Max Golembiewski (Monroe) and returned it 27 yards for a touchdown.

When including sack yardage, the North limited the South offense to just 74 total yards, including negative-15 yards on the ground. The North also intercepted three South squad passes, including Loker's Pick-6.

The North offense wasn't exactly blowing the doors off, limited to just 138 yards while turning the ball over three times.

North quarterback Quinton Lamers (Rhinelander) was one of the bright spots, completing all six of his passes for 35 yards, adding six yards on the ground as well.

While he missed both field goal attempts, North player A.J. Arndt (Hartford) was outstanding on defense, leading the team by a good margin with eight tackles, 1.5 tackles for loss, a sack, and a pass breakup.

Travis Wilson serves as the WisSports.net General Manager, Football Editor, and contributing writer for other parts of the site. Wilson was selected as part of the Sports 40 Under 40 list by Coach & AD Magazine and the National High School Athletic Coaches Association for 2019. The Wisconsin Football Coaches Association (WFCA) named Travis the 2015 recipient of the Dave McClain Distinguished Service Award. He currently serves on the WFCA Executive Board as the Website and Communications Director and is a member of the Executive Board of the Wisconsin Basketball Coaches Association. A graduate of Richland Center High School and Mount Mercy College in Cedar Rapids, Iowa, Travis was a three-sport athlete in high school (football, baseball, basketball) and currently resides in Reedsburg. You can follow him on Twitter at @travisWSN.

For the latest and most up to date football news and recruiting information, follow Travis on Twitter @travisWSN. Email story ideas, recruiting info, etc. to Travis at travis(at)wissports.net.