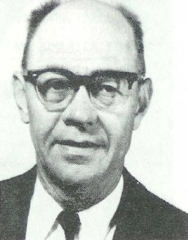 In 34 seasons Carl Anderson coached his teams in football to nine championships and four seasons were undefeated ones.  He was a coach on the South squad in the 1949 All Star Football Game.

Carl was a member of the Wisconsin Coaches Association Executive Committee from 1946 to 1948. He was Director of Athletics at Milton from 1929 to 1970 and the new football field at Milton was dedicated the Carl Forrest Anderson Athletic Field.  In 1963 Carl was selected as Kiwanis - Man of the Year.

During his career Carl attended 50 coaching schools and clinics in five states.  He also attended 121 physical education, recreation conventions, institutes, clinics, and was a contributor in three of them.  In 1945-46 Carl was chairman of the physical education section of the Southern Wisconsin Education Association.  He coached basketball for 21 seasons, baseball, wrestling, and track.

Carl was also on the teaching staff at Milton College.