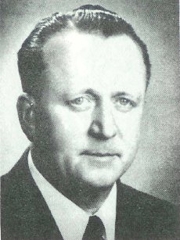 "Dad" Braisher coached his teams at East DePere to four championships and four second place finishes. He was selected as an assistant coach on the North Squad for the 1950 High School All Star Football Game played in Green Bay. In 1964 the citizens of DePere dedicated "Braisher Park" in Dad's honor.

He was recipient of the Fox Cities Sports Award in 1974 and also was selected as DePere's leading Sportsman for three generations. He received the DePere Rotary Club "Roses for the Living" Award in 1974, the Green Bay Elks "Arnie Herber" Award in 1975.

In 1979 "Dad" was inducted into the UW-Oshkosh "Athletic Hall of Fame". After retiring as a high school coach "Dad" Braisher was equipment manager for the Green Bay Packers for 21 years. During this time he received NFL Awards in 1961,1962, 1965, 1966, and 1967. While at DePere High School he also coached baseball and was basketball coach for 33 years.