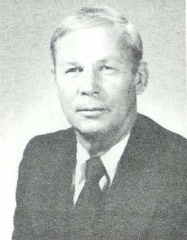 Attended Madison Edgewood High School, Graduate of the University of Wisconsin at Madison

At Middleton the football teams under Otto Breitenbach won three Badger Conference Championships. Teams at Madison LaFollette won two Big 8 championships and were ranked number 1 in the state once.

Otto was also an assistant football coach at Chilton High School for three years, 1948-52.  He coached the LaFollette track team to the Class A championship in 1969.  Otto served as athletic director at LaFollette and is past secretary-treasurer of the Wisconsin Athletic Directors Association.

He is Past President of the Wisconsin High School Coaches Association and Southern Wisconsin Officials Association.  Past member of the Board of Directors of the National "W" Club.  Otto also served as Associate Director of Athletics at the University of Wisconsin-Madison.