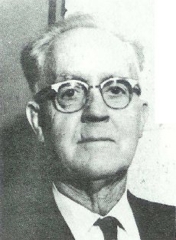 Bill had 15 championships at Arcadia. Twelve seasons were undefeated ones and in 1939 and 1950 they were not scored on. One tie was the only flaw in a 36 game winning streak.

Bill coached basketball for 27 years at Arcadia and his teams won 283 games while losing 184. There were six championships. Eight championships were earned in 23 years as track coach. A sectional championship was won in 1948. Mr. Cashen also coached baseball for 36 years. Bill played his college football at Columbia College which is now Laras College in Dubuque, Iowa.