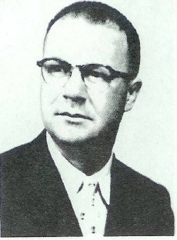 Cliff was cited for his outstanding contributions to the game of football in the State of Wisconsin.