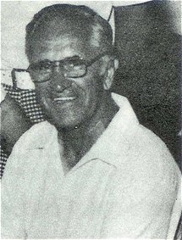 Chuck had six championships at Kenosha and two in New Orleans. Longest winning streak was 27 games.

Chuck began his long and outstanding athletic career at Bradford High School earning nine letters in track, football and basketball. He served as a three-sport captain in his senior year, graduating in 1929. At Notre Dame, Chuck played football under the renowned Knute Rockne. He was the quarterback of the national championship team in 1930.

After four years at Holy Cross High School in New Orleans, Chuck spent five years as backfield coach at the University of Mississippi.

During the war years Chuck served as a coach at Georgia Pre-flight and at Iowa Pre-flight.

In 1946 Chuck was backfield coach at the University of Iowa. From 1947-49 Chuck coached the backfield of the Buffalo Bills. In 1949 Chuck began a 15-year career as football coach of Kenosha Bradford High School. He also coached basketball for seven years. He coached track for eight years and won the Big 8 title three times and State title once.

Perhaps the best-known player developed by Chuck was Alan "The Horse" Ameche whose records at Bradford, Wisconsin and the Pros are still outstanding.

Chuck retired after 27 years of service in the Kenosha schools.