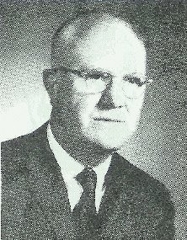 In high school Butch lettered in all major sports and also played for the Town Baseball Team.

Serving in the First United States Infantry Division during World War I, he participated in the Soissons-Cantigny and St. Mihiel Campaigns. He was awarded the Silver Star for gallantry in action and the Purple Heart for wounds suffered during these campaigns.

While at the University of Wisconsin at Oshkosh Butch lettered in football both years that he attended, during which time, Oshkosh won the conference championship. He scored eleven touchdowns in one games. In 1925 he entered the University of Wisconsin at Madison where he received two letters in football. For many years after that he held the school record for the long distance place kick in the modern era. In 1926 he earned All-Western honors at tackle and played in the Annual Shrine Football Game at San Francisco.

In 1927 Butch became the football, basketball and baseball coach at Platteville State Teachers College. He coached basketball for twenty years. His teams won five championships in football and were undefeated three times. He also taught the academic physical education classes, conducted the intramural programs and coached minor sport during his career at Platteville.