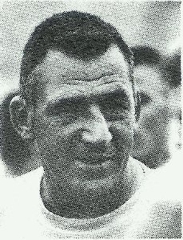 John had many outstanding teams and a number of undefeated seasons. In his last season as coach he led the Blugolds to a second-place finish in the Wisconsin Independent Schools Athletic Association playoffs. The team finished with a 10-1 record.

At Notre Dame he was a starter at right tackle on the football team. As a boxer he won the university heavy weight championship and made it into the finals of the heavy weight division in the Detroit Golden Gloves tournament.

Over a 24-year career (1941-64) as the Aquinas basketball coach, John's teams had a 327-200 record and won five state titles. During his 39 years of coaching, John has received several awards. In 1971 he was honored by WISAA as its Man of the Year. In 1976 the Times Review established the John F. Michuta trophy for "Excellence in Sports Competition."

Michuta coached golf until his retirement in 1979. His teams won three state titles.