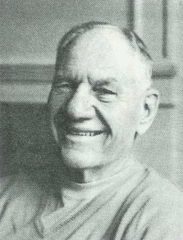 Attended Marinette High School and South Division in Milwaukee Graduate of the University of Wisconsin, Madison

Coach Wilke had 9 undefeated seasons. He played college football at the University of Wisconsin and was a center in the East-West Shrine Game in 1927. At Edgewood Earl Wilke also coached basketball and his teams won 374 games and lost 124 from 1929 to 1958.

In 1968 Mr. Wilke was inducted into Madison's Hall of Fame. That same year he was Madison Service Clubs Mr. Olympics. In 1973 the WISAA chose Earl Wilke as their Man of the year. In 1963 he was Madison's Sportsman of the Year. In a special tribute the Edgewood High School gymnasium has been named after Earl Wilke.