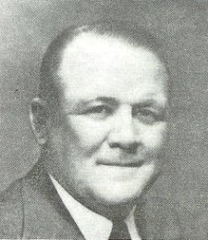 Henry was on a championship football team at Whitewater in 1932. He played semi-pro football with the Chippewa Marines from 1934 through 1939.

He was U.W. Extension Recreation Director at Waupun in 1938-39. Served as athletic director at Beaver Dam for fifteen years and in 1954 was elected President of the Wisconsin Coaches Association.

Henry also headed basketball and track programs as well as assisting in these sports. Most success was experienced when four straight championships were earned in football from 1954 through 1957.

Hank retired from teaching in 1974. Because of his many contributions to school and community the new athletic complex at Beaver Dam was named after Henry H. Derleth.