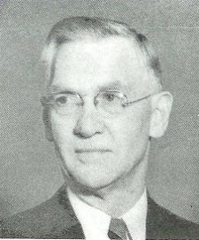 Bill Hoffman won letters three successive years at St. Louis University Prep in football, track, and baseball; and beginning in 1899 he repeated the performance at St. Louis University while also playing forward in soccer for the Sportsmen's Club of St. Louis. He was a halfback, jump and dash man, and pitcher in college. He pitched for Mobile and Waco after college for two seasons, coached at Holy Trininty College in Dallas 1907-1908, and at Spring Hall College Mobile, 1908-1911.

He arrived at Campion in 1911, which had a college department in those days. His 1914 football team won all six games, winding up with a 52-6 shellacking of St. Ignatius College of Chicago.

In World War I Hoffman spent 1917-1918 as athletic director of Camp Sevier, S.C., and of the Great Lakes training station.

From 1923 on, he had only high school sports at Campion. The 1928 "Victory" football team piled up 276 points to 6. The "Conquering Hoffmen" of 1929 is remembered as the best. That squad included future collegiate players like "Jake" Sullivan of Norwestern, "Swede" Cosgrove of Marquette, and captain Dick "Butch" Pfefferle, and all-American at Notre Dame. The 1941 team won nine straight. Knute Rockne's son Jack was a sophomore at Campion that year.

Bill coached all major sports at Campion and his record came to 685 victories, 312 defeats, and 18 ties for a percentage of .694. His football log reads 166-40-16. In 1950 the newspaper of the La Crosse diocese, then the Register, and presently the Time-Review, established the annual Hoffman trophy for the best diocese grid team. In 1963 the Athletic Center at Campion was named the W. S. Hoffman Memorial.

For over fifty years his life was at Campion.