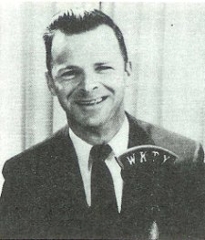 For thirty-two years Charlie has been covering high school and college sports for WKTY in LaCrosse. In this time he covered more than 600 football games and 2,500 basketball games. He has originated football and basketball broadcasts from around 90 different cities in Wisconsin, Minnesota, Iowa, Illinois, North and South Dakota, and Florida.

He covered the North and South all-star football games dating back when they were played at old city stadium in Green Bay. He covered two Cigar Bowl games and has done play by play of Boxing, Track, and Golf. In his years as a sportscaster he has done 15 state basketball tournaments at Milwaukee for WISSA and 30 state tournaments at Madison for WIAA.

He has covered girls basketball including state tournaments for both WISSA and WIAA.

He has done thousands of interviews with pro, college, and high school coaches, athletic directors, principals, players, and fans.

Charlie is a true promoter of high school football and his support has been a real contribution that deserves recognition in the Hall of Fame.