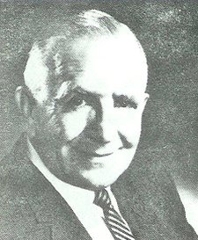 Coached football at Cudahy high school for 32 years where his teams compiled a record of 145 wins, 98 losses, and 10 ties.

The football teams at Cudahy High School under Joe won seven championships in the Milwaukee Suburban Conference. Most success was experienced from 1947 through 1957 when four championships were won and areca. of 69-21-4 was compiled. During this time eleven consecutive wins were recorded over arch rival South Milwaukee.

In 1950 Joe was selected as an assistant coach on the South squad in the old all-star series played in Green Bay. Joe in addition to football coached basketball, boxing, golf, swimming, tennis, and volleyball. He was the head of the physical education department and in 1946 was appointed to direct the city recreation department, a position held until retirement in 1974.

Joe was athletic director at Cudahy for forty-two years.