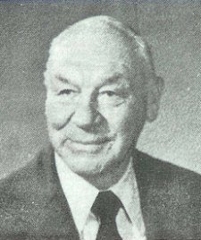 Attended West Technical High School in Cleveland, Ohio Graduate of the University of Wisconsin-Madison with BS and MS

Dynie graduated from the University of Wisconsin in 1929 and began his coaching career at Springfield High School in Ohio. He coached football and basketball for five years. During that span he had a string of 40 straight wins in football and 25 straight in basketball was broken at the state tourney.

He played professional baseball with Dayton of the Mid-Atlantic League and in 1931 with the New York Giants.

While at U.W. he organized the Big Ten 150 Lb. football league. During the two years the league existed Wisconsin won the championship. He continued as head baseball coach for 31 years before retiring in 1970. His teams won Big Ten championships in 1946 and 1950.

He coached many outstanding baseball players that went on to long careers in professional baseball.

There is much more but probably the most significant is the influence he had on the many players and students that were under his guidance.