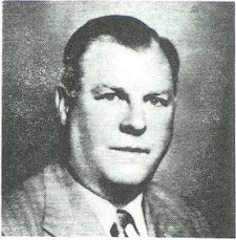 Hurley for 19 years,
Ashland High School for 10 years.
Assisted at Beloit Memorial and Beloit Catholic.
Superior State College for one year.
Coached in some capacity for 54 years.

Roy attended the University of Wisconsin in 1916-17 before going into the military service for 19 months. He had special training at Harvard University and spent 10 months flying East Coast Patrol. He played football, basketball, and baseball on regimental teams.

At Harvard he was in the semi-finals of the Army and Navy tennis teams. At River Falls he was quarterback of the football team, played baseball, and participated in track. He was the college tennis champion for two years. He went to Hurley in the fall of 1923 and had a football percentage of .640 for 19 years. Basketball percentage was .670 and teams participated in 18 tournaments and competed up to the last night or the finals in 17 of 18 tournaments in some capacity.

He moved to Ashland in 1942 and left after the 1951-52 school year. During these years he had many outstanding achievements. Breaking Wausau's long football winning streak of 39 wins. At Ashland he introduced a stunting 44 defense in the early 1940's. Had conference championships in football, basketball, and baseball. Participated in State basketball tournaments.

He developed the Center Quarterback butt-to-butt exchange. He coached one year at Superior State College before going to Beloit Memorial High School as basketball coach. Roy spent many years assisting in football at Beloit Memorial and Beloit Catholic.

Many of his athletes decided to follow his influence and went into the coaching profession at both high school and college levels.

He coached several of the North All-Star Football teams before the game was discontinued after the 1951 season. Roy Melvin was one of the outstanding pioneers of Wisconsin High School football.