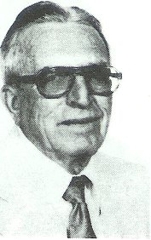 Slinger 1934-35,
Madison Central 1936-64,
Assistant at Madison LaFollette 1965-75.
Gus played high school football in Whitewater and went on to Whitewater State where he lettered for three years. In 1932 he was a member of the Whitewater team that won the league championship.

Gus coached for 42 years in the Madison school system. Most of these years were spent at Madison Central until the doors were closed in the sixties.

After leaving Central Gus assisted Otto Breitenbach at Madison LaFollette. Teams at Central won "Big Eight" championships in 1940 and 1941. Paul Romano and Ted Scallissi were two of the outstanding players that Gus coached. His teams won the Madison city championship a number of times.

Gus also coached basketball and baseball. In 1949 his volleyball and baseball teams won the state championship. One of his most significant contributions was his efforts along with Willis Jones in the formation of the Four Lakes Football program in Madison.