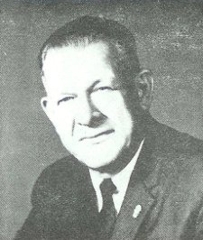 Coached high school football at DeForest for 27 years. His record was 170 wins, 58 losses, and 7 ties. He had ten championships with six teams being undefeated.

"Dutch" began his coaching career at DeForest High School in 1938. He was instrumental in the start of the football program, and for its continued development. The program started with six-man football in 1938 and changed to eleven-man in 1949. Teams were dominant in the old Madison Suburban Conference.

Dutch was born in Colorado and raised in Sabetha, Kansas. He attended Sabetha High School where he starred in football, basketball, and track. He attended Lakeland College where he was an outstanding football player. He was twice elected football captain.

"Dutch" is a charter member of the Lakeland College Athletic Hall of Fame. He coached basketball, boxing, and baseball as well as football before becoming principal and later superintendent of the DeForest Schools.

He has not missed a DeForest High School football game, home or away, since the first game in 1938. That is 43 years without a miss! Dutch says, "No man is stronger than his support people make him. I had some excellent assistants."