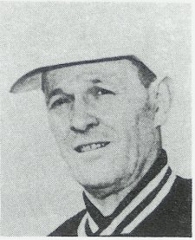 He served in France during World War I.

His first coaching job was at Garden City, Kansas High School where he coached football, basketball and track. His football teams lost only one game in three years.

In 1922 he moved to Central High School in Minneapolis, Minnesota where he coached all sports.

In 1924 Carl accepted the football job at Ripon College and he held that post for 32 years. His football teams at Ripon won 15 championships.

He was athletic director from 1924 until his retirement in 1961.

While at Ripon Carl coached track for 15 years and he started the baseball program in 1957. He also coached basketball. He was responsible for achieving accreditation of the Health, Physical Education and Recreation Department for men in 1926. The same status for women in 1947.

In 1980 Carl was selected as a charter member of the Ripon College Athletic Hall of Fame.