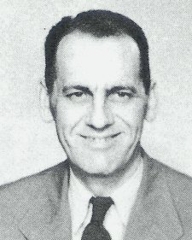 Tobe was a coach for forty-one years. At Omro he coached all sports for sixteen years. His basketball and baseball teams won championships in the old 7-C Conference. At Winneconne Tobe assisted in football for three years, was head basketball coach for two years, cross country coach for 3 years and coached track for 20 years. His 1950-51 basketball team won a Little Nine Conference Championship. His track teams were always strong and they won a number of championships.

Tobe started his coaching career at Omro in 1929. He introduced football at Omro High School after the program had been dropped for a number of years. In 1933 they had their first undefeated season, outscoring their opponents 180-6.

In the fall of 1979 Tobe was recognized by the student body of Omro High School for his contributions to education, athletics and community during a special assembly program. This was in recognition of his fiftieth anniversary as an outstanding coach and citizen.

Tobe is a charter member of the Wisconsin High School Coaches Association.