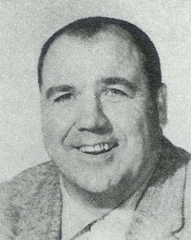 Ted coached football for 26 years. Fifteen years as head coach at Green Bay Premontre. He coached basketball for 8 years at Premontre with a 103 - 80 record. He also coached baseball for 5 years and track for 3 years.

A graduate of Stevens Point State Teachers College in 1942 Ted went on to play with the Green Bay Packers for nine years. He was an outstanding fullback and kicker. He was named to the All-pro Team in 1944, 1945 and 1946. He led the league in ground gaining and scoring once. He still ranks as one of the all-time Packer scorers with 392 points. His longest field goal was 52 yards.

Ted was much more than a coach. His great zest for life and love for young people will always be remembered.