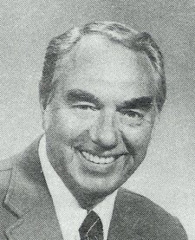 TV 6 Sports Director Earl is one of the country's best known and most widely respected sportscasters. He is the unprecedented eight-time winner of the "Wisconsin Sportscaster of the Year" award (1959, 1964, 1966-69, 1971 and 1972) and is a sports-casting veteran of over 30 years.

As the former "Voice of the Braves," he was the Milwaukee Braves' radio play-by-play man for eleven years. He joined TV 6 in 1963, two years before the Braves departed for Atlanta. He also has handled several national sports-casting assignments, including the 1952 NFL championship football game on TV, the 1953-55 NFL championship games and the 1955 all-star baseball game on radio, the 1957 and 1958 World Series games on radio and the 1964 NFL play-off bowl on TV.

Earl has also been play-by-play announcer for the Green Bay Packers on both radio and TV. From there, he announced play-by-play on radio for the Wisconsin Badger football team.

After spending four years playing minor league baseball, Gillespie began his sports-casting career in Green Bay, Wisconsin. In 1951, he moved to Milwaukee to broadcast Milwaukee Brewer baseball games. He is a sportscaster who really cares about high school athletics. He initiated a "Special Report on High School Sports.