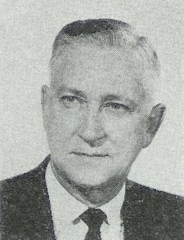 Bernie starred in football and basketball at Hamline and at the University of Minnesota. He started coaching in Duluth, Minnesota in 1925.

In 1928 he went to Milwaukee East Division High School where he coached for ten years. Teams at East Division won 58 games, lost 16 and tied 6. They won six championships, five in succession and four seasons were undefeated with a string of 32 straight wins.

He was head football coach at Lawrence University for 27 years. His teams at Lawrence had a record of 111 wins, 78 losses and 5 ties. They won six Midwest Conference championships and finished second three times. Bernie was athletic director at Lawrence from 1961-70.

He was inducted into the Wisconsin Athletic Hall of Fame in 1981.