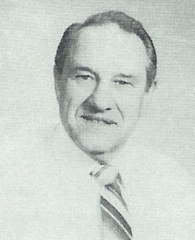 He became the Athletic Director at South in 1976.

His teams from 1957 through 1960 were undefeated, and four seasons without a loss. His teams finished 2nd in the state rankings four times.

Ken spoke at a number of coaching clinics including the University of Wisconsin, Beloit College, Lakeland College and New Trier High School in Illinois. He served on the WIAA Advisory Committee when the original football playoffs were drafted. He has officiated football, basketball, wrestling, track and baseball for some 30 years. He was picked to officiate two state tournaments in basketball at Madison as well as seven state tournaments in basketball for W.I.S.A.A.

Ken has had a number of outstanding athletes in his program but John Anderson of the Green Bay packers has gone the farthest.