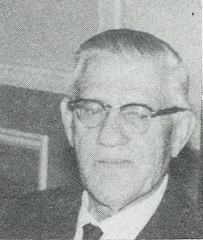 Some men search a lifetime for success. Pat carved out two successful careers during his years, first in coaching and later in administration.

He served as Director of Athletics and football, basketball and track coach at his hometown of Freeport, Illinois, 1921-26. He had two undefeated football teams there in 1924 and 1925, played on a State Championship team in Freeport in 1915 and coached that team to a State Championship in 1926.

He was inducted into the Illinois High School Basketball Coaches Hall of Fame as both player and coach. He was also active as a player in football, baseball and track.

Pat served on the UW coaching staff 1926-29. He was Freshmen Football Coach at the UW, under both George Little and Glenn Thistlethwait. He went to Oak Park, Illinois High School as Director of Athletics and Football Coach, 1929-47. He followed Bob Zupke and Glenn Thistlethwait as coach at that school. While coaching there, Pat had 13 Chicago Suburban League Championships in football in 19 years.

After retirement, he came back to Madison as. Director of Health, Physical Education, Recreation, and Safety under Phil Falk from 1947-62.

His hobby was starting track meets, which he had done since 1921. Pat was Head Big 10 starter for six years. Was starter at the university of Wisconsin for Tom Jones, Guy Sundt, Riley Best, Rut Walters, Bob Brennan and Bill Perrin.