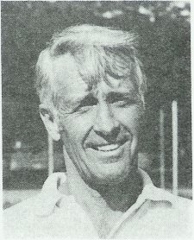 Bob Larsen coached high school football for 21 years. Most success was achieved at Hartford High School where teams won six championships in 15 years. Three of those teams were undefeated.

At Kendall in 1958 his football team went undefeated in winning a championship. Bob was a head baseball coach and assisted in basketball during his coaching career. He started the tennis program at Hartford. In 1977 he went to Carroll College as athletic director. In 1980 he took over the reins of head football coach at the University of Chicago.

While in high school coaching Bob was an active member of the coaches association.