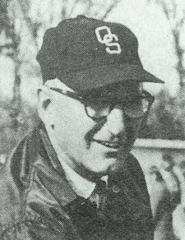 Russ Young coached football for 40 years. He was head coach at West DePere High School for 13 years, Wayne State, Nebraska one year and at the University of Wisconsin-Oshkosh 14 years.

He coached all sports at West DePere High School and was active in the state coaches association. At UW-Oshkosh Russ coached the basketball team to a championship in 1963-64 and took the team to the N.A.I.A. National Tournament the same year.

In 1976 Russ was named Coach of the Year. He was inducted into the U.W. Oshkosh Hall of Fame in 1977. During his career Russ also coached baseball, golf and track.