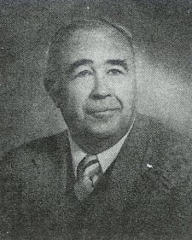 Wallace "Blackie" Zimmermann coached football for 30 years, 28 as head coach. He assisted in basketball for four years and baseball for nine years. He was the head swimming coach for four years. At Delavan and Delavan-Darien High Schools he coached the track teams for 24 years, winning six championships. He has been Athletic Director since 1957.

Blackie has had articles published in the Athletic Journal and The Coaching Clinic. His many honors include: All Conference Center in football at La Crosse State Teachers College in 1942 and 1946; Literary Key, La Crosse State Teachers College in 1942; Who's Who Among American College Universities in 1947; Honorary Letter Award from Delavan-Darien High School in 1976; Honorary Chapter Farmer of Delavan-Darien Future Farmers of America in 1972; and Benevolent and protective Order of Elks - "Elk of the Year Award" in 1978.