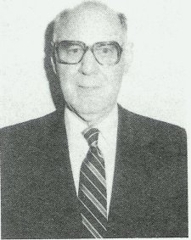 From 1947 to 1982 John served as Athletic Director and Chairman of the Department of Health and Physical Education at the University of Wisconsin-Platteville.

Football achievements include championships in 1952, 1953, 1954, 1956 and 1957. As defensive coordinator he developed the top defensive team in the nation in small college division in 1956. Opponents were limited to 48 yards total rushing per game.

At Platteville John has been the foundation of the Physical Education Program. He oversaw planning and construction of all major physical education and athletic facilities now in use.