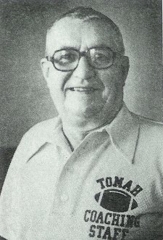 Earl was the Assistant Football Coach at Tomah High School for 36 years.

His record was 188 wins, 106 losses and 8 ties, eight championships and four undefeated seasons.

Earl was head track coach from 1947 to 1971 and assisted in basketball for eleven years. He was athletic director and with the Parks and Recreation Board for the City of Tomah for 30 years (1952-82).

As an athlete Earl played football and basketball and participated in track.

During his tenure as track coach at Tomah, Earl built a new cinder track. On June 8, 1982 Earl was honored with a special day by the people of Tomah.