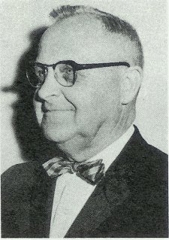 Jake coached for 24 years. In 1921 he started football as a varsity sport at Cuba City. At Milbank, S. D., his teams lost only four games in five years while winning 36. At Beloit three Big Eight titles were won with the 1936 team being undefeated. As a basketball coach his teams won six conference championships and three state titles.

He served as athletic director at Beloit from 1932 to 1946. From 1946 to 1965 he was coordinator for secondary athletics and City Recreation Director.

He was enshrined into the Athletic Hall of Fame at UW-Whitewater in 1966. He is also a Charter member of the Wisconsin High School Basketball Coaches Hall of Fame. In 1980 the Beloit Board of Education officially named the new athletic field adjacent to the high school the H.L. "Jake" Jacobson Athletic Field.

After mandatory retirement in 1965 Jake has served as a Rock County Supervisor for 16 years.