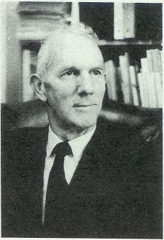 Ken coached for 40 years. Besides football he coached basketball, tennis, and track.

While at Lawrence College Ken was an all-around athlete, captain of the football team, and made All-Midwest end for three years.

He served in the Navy during World War II where he worked with Bud Wilkinson, Paul (Bear) Bryant, Red Saunders, and Boden Wyatt. Together they developed the "Split-T" formation, which was the forerunner of the option football of today.

At Milwaukee Country Day his teams had a 32 game winning streak. Ken also found time to officiate football and basketball at both the high school and college levels for 25 years. Ken's last team (1970) was undefeated and it was the first non-catholic private school to compete in the WISAA playoffs.

In 1974 the University School Football Field was named after Ken Laird. He has received the Lawrence University Distinguished Service Award and was elected to Kappa Delta Pi, National Honor Society in graduate education.

After retirement Ken served as a member of the WISSA State Tournament Selection Committee for football.