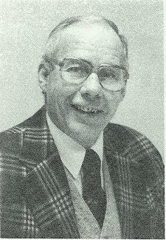 Ralph coached football for 12 years with a winning percentage of 83%. He also coached basketball, baseball and track. His overall coaching record for 14 years was 268 wins, 87 losses and 4 ties. His basketball teams won three Marinette-Oconto Conference Championships in five years. In 1957 his track team won the state championship. At Lena and Peshtigo 67 of his football players were selected for the first team all conference offensive or defensive teams. Two were all state first team with several on the second and honorable mention teams. One of his players played for the Boston Patriots.

As an athlete Ralph was awarded 12 letters at Berlin High School along with being on the honor roll for four consecutive years. In 1950 he captained an undefeated football team at Illinois State University. He was a WIAA football and basketball official for 15 years. He is a member of the Oshkosh Southwest Rotary Club, Phi Delta Kappa, and the Wisconsin as well as the National Association of Supervision and Curriculum Development.

After leaving coaching Ralph served as Principal at Peshtigo and Mayville High Schools. In 1968 he became Coordinator of Secondary Education in the Oshkosh School System.