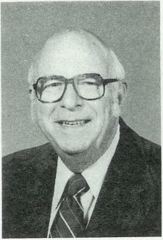 Bob has been a sportscaster for 37 years at WHBY in Appleton. He has done over 35,000 sports broadcasts including daily sportscasts and play-by-play of football, basketball, baseball and softball.

Bob has been a member of the American Legion for 38 years. He served overseas for 42 months during World War II. He is a lifetime member of the Appleton Elks Club. He has helped raise over $350,000.00 for area youth sports. He is a member of the Executive Committee of the Red Smith Sports Award Dinner. He has been made an honorary graduate of Xavier and St. Mary high schools. An annual scholarship in his name is funded by the Appleton Noon Optimist Club.

He received the Man of the Year award from the Wisconsin High School Athletic Directors Association. In 1982 he was inducted into the Wisconsin Basketball Coaches Hall of Fame. In February of 1981, after 42 years Bob Lloyd retired from Kimberly Clark Corporation where he was Director of Customer Relations.