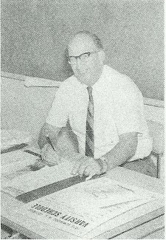 Arnie coached every year of his teaching career, beginning in 1941 after graduating from college in Eau Claire, where he starred in football and basketball under Coach Bill Zorn. He coached football for 24 years. He also coached basketball, wrestling, baseball, volleyball, and softball with an overall record of 596 wins, 339 losses and 6 ties.

Arnie served as athletic director for 35 years. In 1971 the Elmwood Raiders went 9-0 and finished at the top of the UPI rankings for schools with an enrollment of 500 or under. That same year McKern on was runner-up in the state as coach of the year.

He was a volunteer fireman for 16 years. He has been a member of the Lions Club, Rod and Gun Club, Boosters Club, Community Club, Altar Rosary Society, WEA, NEA, High School Coaches Association, and Wisconsin Athletic Directors Association.

In 1982 Arnie retired as a teacher and coach. After retirement Arnie was still very active in Elmwood community life.