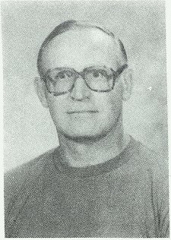 His record was 147 wins, 67 losses and 10 ties, six championships with four undefeated seasons.

Bob coached football for 26 years. During this time his teams had a 32 game winning streak. He also coached basketball, track, golf, tennis, and baseball. He coached the Madison Mustangs Semi-Pro football team to a championship. His 1969 summer baseball team at Brookfield Central were WIAA State Champs.

At Lake Mills he guided the Girls Track Team to a Class B State Championship.

As an athlete Bob played in the 1947 High School All-Star game for the South. He played football and basketball at the University of Wisconsin-Madison. He was selected to play in the Blue-Gray Game in Montgomery, Alabama in 1950.

In 1978 Bob was head coach of the South All-Star team that defeated the North team 13-6 in the Shrine Game.