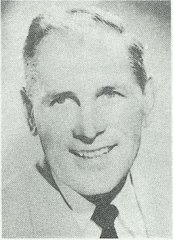 South Milwaukee High School 1932-38;
Racine Washington Park 1938-48;
LaCrosse State 1948-52;
Fresno State, California 1952-59; and
University of Wisconsin-Madison 1959-65.
Clark was an outstanding athlete in football, basketball, and track at LaCrosse State College. He was captain of both the track and football teams and was an all-conference center in basketball. He was also a member of the Athletic Board, Student Council, MIAA, Board of Control, vice president of "L" Club, President of the Sophomore Class, and a member of Phi Epsilon Kappa.

Van was head football, basketball, and track coach at the high school level. Conference championships were won in all sports. In 1943 his Washington Park basketball team won the State Championship and were runner-ups in 1946. At South Milwaukee his track team finished first in the state. He returned to La Crosse State to coach from 1948 to 1951. His record was 31 wins, 5 losses, and 1 tie. His 1950 team was one of Wisconsin's finest ever, compiling a 9-0 record and defeating Valparaiso University 47-14 in the 1951 Cigar Bowl in Tampa, Florida. In 1952, Van went to Fresno State, California, and coached for seven successful seasons. In 1959, he returned to Wisconsin as assistant coach to Milt Bruhn with the Badgers until his untimely death in 1965.