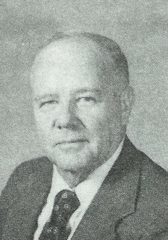 Gene is a practicing Attorney in the City of Madison for over 30 years.

He is a World War II veteran seeing combat action in the European Theatre as a navigator in the Air Force. He is a Lt. Colonel (Ret.) in the Air Force Reserves and served 4 years as Liaison Officer for the United States Air Force Academy.

He began officiating high school and college football and basketball in 1950. He was added to the Big Ten football officiating staff in 1962 mandatorily retiring after the 1980 season after 18 years and 192 Big Ten assignments.

Gene is a former President of the Board of Education, Joint District #8, Madison, Wisconsin serving six years. He then became the Supervisor of Football Officials for Big Ten Intercollegiate Conference and Wisconsin State University Conference.

He was inducted into the Wisconsin High School Basketball Coaches Association Hall of Fame in 1983.