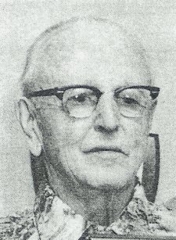 Hutchinson, Minnesota 1917;
Beaver Dam High School 1924-25; and
Port Washington High School 1926-49.
At Port Washington his teams won 99 lost 42 and tied 18.
At Stout Institute Sam participated in football, basketball and baseball. In 1917 he began his teaching and coaching career at Hutchinson, Minnesota where he coached football and basketball for one year.

In 1918 he entered the U.S. Navy. After leaving the service Sam moved to Beaver Dam where in 1924 he was named the athletic director and coach of several sports including football and basketball.

While teaching and coaching at Port Washington High School, Sam became very well known state-wide. He coached five state championship track teams. He coached varsity basketball from 1926 to 1947 and compiled a record of 255 wins and 115 losses. His 1936 squad won the state Class "B" Championship. His football teams were undefeated in 1930, 1931 and 1932.

On September 3, 1983, Sam was inducted into Stout University's Athletic Hall of Fame.