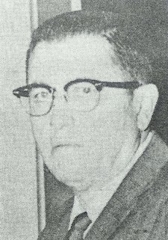 His record was 111 wins, 42 losses, 7 ties, and ten championships with nine undefeated seasons.

During his reign as basketball coach Mayville High School had six championship teams-two of these teams played in the state tournament. The 1935 team won the state class "B" championship.

As an athlete Ray Dunn won letters in football, basketball and track. In addition he was elected to an honor society for high scholastic achievements.

He was a certified WIAA official. He served as President of the Wisconsin High School Coaches Association. He was a member of the South Wisconsin Education Association and the Schoolmasters Club of Wisconsin.

He also served in the armed forces during World War II.