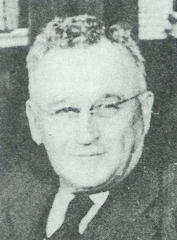 Cabby graduated from Sparta High School in 1911. He competed in football, basketball and track. After high school he enrolled at Lawrence College where he starred in football.

In 1914 he introduced football at Hillsboro where he also served as Principal. His teams won 10 and lost 3.

During World War I Cabby entered the service and served in France. After the war he returned to Wisconsin and coaching.

Cabby was principal and coach at Marion from 1920 to 1923. In the fall of 1923 he moved to Wausau where his teams compiled a record of 57 wins, 11 losses and 6 ties. They won the championship four times. While at Wausau he introduced hockey to the Wisconsin Valley Conference. In 1937 Cabby moved to Edgerton where he coached until 1945. In the fall of 1945 he returned to Sparta his hometown and coached until 1950.

Besides football he coached basketball, boxing, baseball, and track. He was coach of the South All Star team in 1946, an original and long time member of the State Rules Committee.

He wrote the first Wisconsin State Boxing rules and was a consultant to several other states on the rules.

Cabby is a member of the Wisconsin Basketball Coaches Hall of Fame.