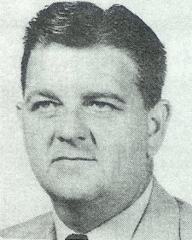 Slinger one year; and

Werner "Soup" attended St. Norbert College where he played football and basketball for four years. At Plymouth he started many recreational activities while he served as the city's recreation director.

He is a charter member of the Wisconsin Athletic Director's Association. He served as a director of the National Baseball Congress.

The community honored Coach Finke by naming the football field in its initial dedication, the "Werner W. Finke" field.