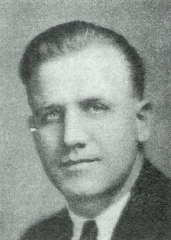 While in high school Martin was a starter on the basketball team which won the District championship. Martin graduated from Little Falls, Minnesota High School in 1918. After high school he served in the armed forces during World War I.

In 1921 Martin Jackson was hired as a teacher and coach at Arcadia High School. His basketball teams won 24 and lost 7. In his second year at Arcadia he started the football program. He left Arcadia in 1923, teaching at high school in Illinois and Wisconsin. In 1927 he returned to Stout to obtain his bachelors' degree. He was a regular on the football and basketball teams earning all conference honors as an offensive guard and defensive halfback in football his senior year.

Martin coached football at Wauwatosa from 1929 to 1949. His teams won 100 games, lost 50 and tied 8. They won the conference title three times and finished second 11 times. His basketball record from 1929 through 1944 was 151 wins and 92 losses. They qualified for the state tournament twice.

In 1938 coach Jackson was invited by Harry Stuhldreher to be a speaker at the State Coaches' Clinic at the University of Wisconsin in Madison. After teaching at Wauwatosa High School for 37 years Martin retired but did not give up teaching or coaching. He became a teacher at Milwaukee Tech and assisted Jim Richardson in football.