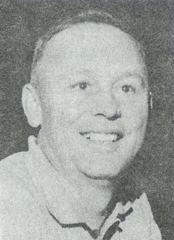 John served as a Gunnery Officer in the South Pacific during World War II.

He went to Ripon College in 1957 as an assistant football coach to Jerry Thompson. He took over the head position in 1958. John coached for 16 years at Ripon College until his death in 1973. He had an 87-13-4 record. His teams won five Midwest Conference Championships, four in succession (1963-66). The 1963 team was unbeaten. He also coached baseball at Ripon with a record of 133-76-2 and five Championships.

John served as Athletic Director the last five and a half years of his life. He coached little league. Was a member of the Rotary Club from 1958-71. He organized the athletic program for Badger Boy's State 1958-73. In 1981 he was inducted into the Ripon College Athletic Hall of Fame.