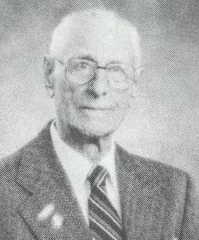 Thorp High School 1927-29;
Green Bay West High School 1929-70; and
Franklin Junior High in Green Bay 1970-80.
Ed participated in basketball and baseball in high school. At UW-Oshkosh he played football and basketball. In Track he established two all-time university sprint records. As of 1985, both records still stood, and the 100-yard dash record stood for 40 years in the Wisconsin State University Conference. The 220-yard record was tied but not broken since 1927.

In 1928 Ed qualified for the United States Olympic team.

At Green Bay West he was an assistant football coach for 28 years. He coached Cross Country and Track, Wrestling and Boxing. In 1934 and 1935 his track team won the State Championship. His teams won seven conference championships. In 1930, 31, and 1932 he helped Curly Lambeau coach the Green Bay Packers.

During the Korean War Ed was assigned by the State Department to instruct Military Marching, Hand-to-Hand Combat, Wrestling, Boxing, Football, and Physical Exercise at school clinics throughout Northeast Wisconsin.

He has been cited by Governor Warren Knowles and State Superintendent of Public Instruction, William C. Kahl for 45 years of devoted service and personal contributions towards the education of Wisconsin’s youth. In 1980 Ed was cited by the Wisconsin Senate for his athletic and coaching achievements. In 1974 he was selected as a charter member of the UW-Oshkosh Athletic Hall of Fame. In 1977 Ed received the Arnie Herber Award at the 16th Elks Sports Award Dinner. He has received personal acknowledgements and citations from Brown County, Oconto County Commission, and the Wisconsin Coalition of Aging groups for his years of devoted service to the welfare of Senior Citizens.