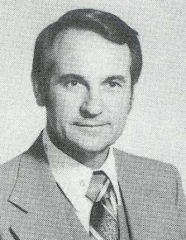 He served as an Operating Room Technician in the Army Medical Corps in Korea and was quarterback of the championship 900th MASH Service Football Team at Camp Atterbury, Indiana.

At UW-Milwaukee Extension letters were earned in football, basketball, and baseball. He was all-conference (offense and defense) and MVP in football in 1954. He was captain of both football and baseball teams 1953-54.

Ray coached for six years at Jefferson High School. He was head coach in football, basketball, track, baseball, and wrestling at various times. His wrestling team won the conference title in 1960. He was Athletic Director for four years and the year around City Recreation Director.

In 1963 Ray moved to Dodgeville and that year his football team won the championship with an 8-0 record, the only perfect year in the school's history. At Platteville he was head wrestling coach for one year.

He was a wrestling sportscaster for area high school and college for a local radio station and was also a member of the State Network High School Wrestling Tournament broadcasting team for six years.

Many of Ray's former football players have had outstanding careers on college football teams.