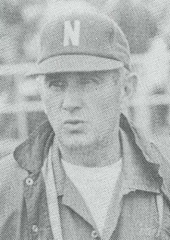 The following year the Blugold squad became the first to travel to the National Tournament at Kansas City. During World War II, he was a lieutenant in the U.S. Marine Corps and served in the Marshall Islands.

Besides football "Chick" coached basketball, boxing, baseball and track. At Mondovi, Kolstads' football team was 19-3-2 with two conference championships. He had an outstanding 61-20 record as coach at Regis, winning the State Championship in 1951 when the school was still known as St. Patricks.

Regis played in the state tournament all seven years Chick coached the basketball team. The Ramblers won the state title in 1952, were consolation champs in 1953 and runner-up in 1954. At St. Norbert, he had a 96-76-5 football coaching record.

He was selected N.A.I.A. District 14 Coach of the Year in 1974. In 1975 he was awarded the Green Bay Elks Club Leadership Trophy. In 1976 he was inducted into the University of Wisconsin Eau Claire Blugold Hall of Fame. In 1979 he was named Professor Emeritus in Physical Education at St. Norbert College. In 1983 he was awarded a trophy for greatest contribution to football in Northeast Wisconsin from MS Association of Northeast Wisconsin.

After his retirement Chick was the assistant football and track coach at West DePere High School.