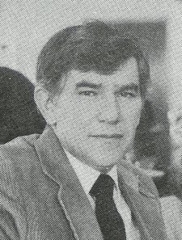 Jack graduated from Amery High School in 1953. He was perhaps the best athlete in the history of the school. In his four years as a running back he scored 37 touchdowns and 15 extra points. As a member of the basketball team he scored 807 points, averaging 11.1 points a game in four years. In 1953 he was selected as Amery Honor Athlete.

After two years in the U.S. Marine Corps he entered college. He lettered in football and basketball at UW-River Falls. He was named All-Conference fullback in 1957 and played with the conference championship team in 1958.

At the time of his death he had just begun his twentieth year as varsity football coach at Mayville. His was the best record ever obtained in the history of Mayville High School. His teams had won 32 of 35 conference games in the Flyway Conference. He had directed the team to the WIAA Playoffs in three of the last four years.

In 1983, Jack received recognition for his football accomplishments by being named District VI Coach of the Year (class B) by the WHSFCA. He also received the Victors and Service Awards from the Wisconsin High School Football Coaches Association.

He is deeply missed and will never be forgotten.