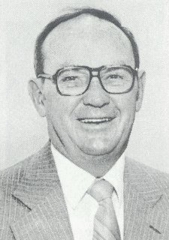 Forrest coached football for forty years. His teams won 238 games at both the high school and college levels. In his 29 years at UW-Whitewater, Forrest’s teams had just two losing seasons. UW-Whitewater's record during his tenure was 187-89-7 with a .673 winning percentage, including 11 Wisconsin State University Conference Championships. He has coached 15 All-Americans.

As a high school athlete Forrest earned 13 letters. He played intercollegiate football, basketball, and baseball at UW-Platteville. After college he played with the Merrill Rangers, a Semi-Professional football team.

Forrest was the driving force behind the construction of Warhawk Stadium, a 13,500-seat structure that cost over $1 million. He has been a speaker at numerous athletic clinics and workshops.

Forrest remained as associate professor in the Coaching Department and Stadium Director at UW-Whitewater for several years.